Every year is different, however I think 2017 is truly going to be one out of the bag. For starters there’s going to be a new guy, who many didn’t see coming, calling the shots over at the White House.

Elsewhere, in the world of athletics, come February there’s also a new kid on the block by the name of Nitro Athletics.

Nitro Athletics is an innovative new take on the sport in which teams compete over non-traditional distances and formats. It’s a new concept and its reason for existing is to attract new fans to an ailing sport. Advocates of Nitro Athletics are promoting it as the savior of athletics after what went down in 2016 with the IAAF complicit in corruption and covering over Russian drug cheating. 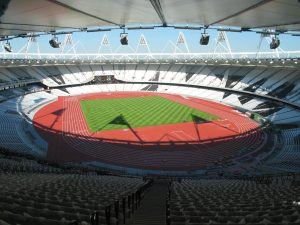 UK Athletics are touting this years World Track and Field Championships in London as being the possible saving of athletics as a sport.

Meanwhile in Europe, UK Athletics Chief Executive Niels de Vos has suggested its going to be the London World Championships that will save the future of the sport, but whichever is true, the Lord Coe has thrown his weight behind both events as the next coming for track and field.

From what I can see Nitro Athletics is certainly something different, although whether it will be athletics’ savior, I’m unsure about yet – not in it’s initial format, but there’s a lot to like about the team based competition.

The way Nitro Athletics works is events are contested across power, endurance, technique and teamwork disciplines spanning sprints, distance, field and para-athletics. There will also be mixed relays which is an idea I really like.  I’ve always thought track was a missing something from not doing that. After all, tennis has proven you can mix it up, and your modern audience is open to having both sexes in the spotlight together. Don’t believe me? Watch any random reality TV show for proof, be it The Block, Master Chef, or Survivor.

At its core, Nitro Athletics is a team sport with individual performances contributing to the overall team score. That’s a smart move because it’s team sports which attract families, but it’s been like that for a long time now. In fact as a youth, I went to South Africa, back when the South Africans were sports pariahs – isolated from the rest of the world due to their apartheid policies, yet athletics had been voted the countries best and most popular sport three years running. A national prestige meet I attended was done and dusted in two hours with events run back to back in quick fire secession. The way the meet ran was there were eight provinces competing, one per lane, in each event. Back then, the South Africans understood that to fill a stadium for a domestic sport, you tapped into tribalism – so they did, In that era, having a series of inter-provincial track meets with television coverage packaged into 2-hours got a big audience watching as well as 20,000 at the stadium. More recently we’ve seen the introduction of the World Relay Championships, again with teams as it’s core focus, this time tapping into nations for their attention and support.

The format of both those meets kept with the traditional relay events over distances everyone understood and recognised so as to tap into an established fan base. Even the rise of street athletics has kept to standard events.

Whether Nitro Athletics, as a derivative striped down version of the sport, like we’ve seen for cricket (with big bash) and football (with Futsol and Beach Football) can do the same is the $60m question. If it can’t, then it will be perceived as nothing more than a short lived gimmick. I  hope traditionalists are able to embrace Nitro Athletics so it can find its place along side traditional athletics, although it will be harder for many to accept. For starters, events are non-traditional such as the 3 minute run, the 2 x 300m relay, a hurdle relay and elimination one and two mile events (as you see in cycling), then of course there are the mixed gender relays.

Then as a team sport there is another more sophisticated element to get your head around that brings in a more formal strategic and tactical element to the contest making Nitro Athletics even more interesting than traditional meets such as the World Relays.

Venue for the Nitro Athletics Finale, Lakeside Stadium in Melbourne. All eyes will be assessing if the new competition can attract a new generation of fans to track and field.

The way it works is each team get two opportunities to level out the scoring by using a power play, a steal or a turbo charge. These ‘levelers’, are levers borrowed from American sports and reality television shows designed to add extra turmoil. When you invoke a power play a team can double their score, take 50% off another teams score, or in the case of the long jump only, declare a distance before a jump is taken where points are awarded only if the declared mark is bettered. In addition to scoring points, penalties are also inflicted should an athlete false start. These extra dimensions spice up the competition and add sharper edge to performances.

I for one will be a keen observer come February when Nitro Athletics kicks off in Australia. I can’t wait to see how it plays out. There are six teams comprising 12 males and 12 females competing headlined by the (Usain) Bolt All-Stars who will vie with England, New Zealand, China, Japan and the hosts over a three meet series.

Good luck to the Kiwi team. Go trail blaze. What a great opportunity to pioneer something new that might just revolutionise the sport to take it forward in a fresh direction.