Despite the turmoil eating away at the IAAF in 2016, this year is a special one, being an Olympic year. In eight months’ time we will have a cracker track and field competition underway at Engenhão Stadium in Rio de Janerio, and I for one can’t wait. As some commentators have already pointed out, while the IAAF might need tearing down and rebuilding, with the drug cheats having been exposed and others under investigation, we still have a quality track and field program to look forward, and I for one very much am.

As a New Zealander however, the one aspect of Rio I’m not looking forward to is New Zealand success. It’s not that I don’t want our athletes to medal, of course I do; it’s what happens next that makes me cringe. The enduring images of our successes that say nothing about New Zealand or who we are when the eyes of world are on us.

Love them or hate them, from the very first Olympic Games, participating nations have flown their flags. A primary purpose for any flag is that it is an identifier that reflects to the wider world something about the essence of both the country and the athlete. In New Zealand we use the national flag in two principle forums, political and sporting, but the truth of it is we have more sports events than political events where we wave our flag around. Apart from the odd government building, flying flags at schools has fallen by the wayside and I think it is because there is little enthusiasm for a flag that is backward looking and a relic of a bygone era that is seen as divisive rather than unifying.

When I see Britain’s Nick Willis (pictured below), winner of the bronze medal on the day in the 1500m at the 2008 Beijing Olympics, I bristle. Britain’s flag dominates a special New Zealand moment. Had this photo been of Jack Lovelock in 1932 or 1936 the representation would have been spot on and would have filled the nation with pride, after all in the 1930’s New Zealanders held British Passports so saw themselves as ‘British’. In fact across the ditch in the 1930’s, Australia’s official flag was the Union flag of Great Britain and they didn’t even have their defaced British naval ensign as we did. But that was 84 years ago now and time has moved on. 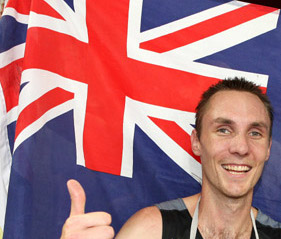 In my novel No Wind I wrote that John Kelly didn’t like his country’s flag so he didn’t grab one offered to him for his lap of honor. The reason I decided to write those lines was to make a point. As soon as you drape a New Zealand flag over yourself, the only thing you see is someone else’s flag. Your national identity becomes compromised. You want evidence of it? Below we see  British rower Mahe Drysdale, winner of the gold medal at the London Olympics for the single sculls, and also a world champion. But hang on, maybe he’s also Australian Mahe Drysdale? If you didn’t know, you wouldn’t really know, and therein lies the problem. These are the images we project of our most famous athletes to the world and precisely the sorts of images that confuse the hell out of the rest of the world as to who we are.

So in that regard I’m not looking forward to seeing more of the same in eight months’ time.

When I see these sorts of images I immediately question, why do we let Britain gate-crash our special moments? And that is what it feels like to me. As an athlete, you may see off the challenges of British athletes to stand on the winner podium with athletes from other nations, let’s pick Germany and Poland, and yet there is Britain gatecrashing the party with their flag. In 2015 at the Rugby World Cup we saw this. All the semi final teams came from the SANZAR competition with Australia and New Zealand advancing to the final. With the eyes of the world tuned in, we saw a double dose of ‘you’re not invited to this particular party’ but yet here you are – ever present in our moments (and with two almost identical flags to the untrained eye adding to the confusion) Britain’s flag doubly dominated the ceremonial proceedings. And yet here in New Zealand, our current situation, today in 2016, is that we have very little to do with Britain. The last British Prime Minister to visit New Zealand was before Margret Thatcher (who was PM from 1979-1990) – so no official political visits for 37 years and counting. Sound like close friends to you? To me, Britain is a country I like. I have many friends who are Brits, and I have friends who I stay with when I’m over there, but Britain to me, is just another country, one of many that we do some business with and to whom we visit and enjoy, same as we do with Spain, Vietnam, China, Germany, the U.S, Italy and so on.

To that end I can only hope that Mahe, and our other athletes who win medals in Rio, are finally able to truly reflect their success as New Zealanders who hail from a modern independent nation, rather than as being seen as British or confused as being Australians. By embracing the referendum to adopt a new flag we can better reflect ourselves to the world as a modern, forward facing progressive nation. 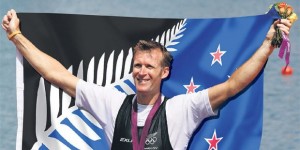 In a sports context if I look at this image of Mahe (see right), finally I feel genuine national pride. Gone is the ‘gatecrasher’. This image just makes total sense to me. Suddenly Mahe is transformed back to being a New Zealander. There is no mistaking where he’s from or what his nationality is. The flag’s colours naturally fit, the fern blends and with the remnants of the current flag, namely the stars, there remains a lineage back to our history and heritage. Make no mistake this is a flag that reflects in no uncertain terms who we are.

So it just makes sense to change to me. I hope this is the flag we can wave in Rio. I suspect even if it is rejected, it’ll be the flag we end up waving in Rio and in Tokyo in the years to come.