I’m going to give myself a pat on the back.

Growing up in Paekākāriki, it was a beach life. A big focus over the summer months was surf lifesaving. It stood to reason. As a beachside community, people swam and surfed there. While I was never actively involved the surf club, a lot of my friends were. That was because I was a runner who spent many hours running on the beach instead, but sometimes just sitting on the sand, sometimes surfing, then later when I used to go up to Mount Maunganui Beach – having a social kick-around and the odd game of beach volleyball. 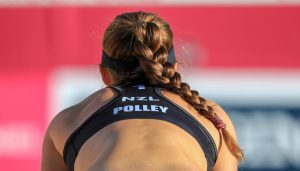 It’s a game I’ve always loved because of it’s simplicity. I used to stop and watch professional games at Surfers Paradise when there, and really enjoyed watching the Beach Volleyball on Oriental Bay Beach in Wellington when the city was a stop on the national circuit for a few years.

I probably enjoy the game more since the sport gained Olympic status as it’s a game made for television, although back when beach volleyball was nominated for acceptance as an Olympic sport, traditionalists gave the proposal a serve. Apparently, beach volleyball wasn’t a real sport went the argument, rather it was a frivolous picnic game not worthy to stand alongside other entrenched Olympic sports such as water polo, handball, wrestling, archery, clay shooting etc. And it was a sport that brought out intolerance. It was seen as sexist and exploitive to woman due to the skimpy attire. For me that was all bullshit. Like every sport, beach volleyball had its own roots and heritage, reflected in playing uniforms, the same way women still wear dresses on a tennis or netball court, where shorts would be a lot more practical – as they are on a basketball court.

As someone who’s previously declared, ‘I rather enjoy watching beach volleyball,’ I got sly looks by those convinced my enjoyment was only about ogling at bikini clad chicks. Sure, I’ll admit it, I’m a red-blooded male, but I also love the power of the game. Beach volleyball is a deceptively hard game, given it’s played on soft sand, requiring all round athletic prowess; agility, flexibility, coordination explosive power and great teamwork, all the attributes you’ll find in other sports such as track and field, swimming, rugby, football, tennis, handball and waterpolo etc. yet still with that disapproval factor. 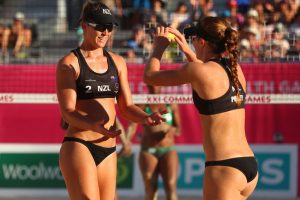 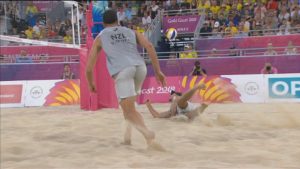 … to refocus on a game that’s high action, spills, and thrills on the sand.

Despite the protestations from the non-believers, beach volleyball certainly made its mark at the Olympic Games. Of all sports – it stands alone as bringing it’s own party with it into the Games, complete with dance troops and loud beaty music not found at the other venues. The traditionalists cite such crass culture as proof these new sports are heresy and don’t belong. They are wrong. Since its inception as an Olympic sport, beach volleyball is among the top few for attendance. The reason may well be because of the music and dancers creating such a fun atmosphere. Those things certainly make it an innovative and progressive sport, as evidenced with the 2015 World Championships played out on pop-up arena including on an artificial island in Holland.

At the latest edition of the Commonwealth Games, held on the Gold Coast of Australia, beach volleyball, like in Rio two years ago, is right at home on golden beaches, and the attendances at Coolangatta Beach have been totally sold out.

When I wrote my first novel No Wind I made home for Kelly and Janine in a beach side town. Drawing on my life in Paekākāriki, it made perfect sense that Mirka, growing up on the beach as a sporty kid, would take up a beach activity. It was never going to be surf lifesaving because I was plotting to take her to the Olympics, and it’s taken three novels to land her on Copacabana Beach, the birthplace of beach volleyball, where my latest novel Spiked plays out Mirka’s story.

When I wrote my upcoming novel Spiked, I was acutely aware that despite being an outdoorsy nation with easy access to beautiful beaches, we haven’t had the same pedigree at an elite level that we’ve enjoyed in other sports, alongside similar nations to ours when it comes to beach volleyball, so my story might have seemed somewhat fanciful and without any realistic basis.

Thank Goodness for Shaunna Polley and Kelsie Wills along with Sam and Ben O’Dea, who all acquitted themselves so well on the sand at the Commonwealth’s, with the O’Dea’s winning bronze.

In doing so well they all got good television coverage heightening awareness for their game. I enjoyed every moment of it. The O’Dea’s bronze in the men’s beach volleyball gave Spiked real-world credibility, so whew! Thank’s for that brothers O’Dea in proving we can play and win on the sand at a major Games. And with their successes, same as for those in snowboarding at the PyeongChang Winter Olympics, our young athletes will eye up these new sporting successes and hopefully become inspired to grow our international pedigree and standing even more.

As for Spiked, it’s due out later this year, coming to you now with real-world creditability. 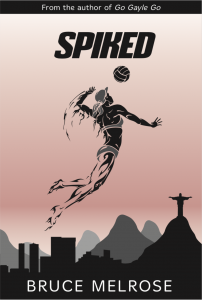 Blood and Spite on the Sand. Spiked is due out in 2018