With the Rio Olympic Games three weeks away, something tells me we will see athletes caught out drug cheating, if not in Rio, then sometime after. Sadly it’s something that’s been going on for a long time now.

The third section of my first novel No Wind is called Reindeer Milk. The story line was influenced by two real events. One concerns reindeer milk which I’ll leave for another blog, the other was inspired by an Olympic oddity that befell New Zealand cyclist Bruce Biddell.

In 1970, Biddell won the cycling road race at the Edinburgh Commonwealth Games. Two years later, he lined up in the 1972 Munich Olympic cycling road race. Insofar as road races go, this one had its fair share of action occurring outside the race itself. NCA (National Cycling Association – an IRA all Ireland cycling body without any affiliation to the International Cycling Union) associated protesters held up the race start, then during the race itself, on bikes, managed to interfere with and eventually remove Irish rider Noel Taggart from competition.

Records show the cycling road race was won by Dutchman Hannie Kuiper, 27 seconds ahead of a group of five riders who chased him home. It was a blanket sprint, with the four riders crossing the line within 0.03 of a second of each other. That amounts to overlapping wheels crossing the finish line – it was that close. The silver medal was awarded to Australian Clyde Sefton while Spaniard Jamie Huélamo claimed bronze from Biddell, who in turn held off two British riders. Subsequent to the race Huélamo tested positive for the drug coramine (a stimulant that acts on the respiratory system to aid greater stamina. It should be noted that at the time, coramine was available in over the counter products such as lozenges).

The 1972 Munich Olympic road race finish | Hannie Kuiper has finished leaving Bruce Biddell and four others to fight it out for the remaining two medals.

According to Biddell, who has lived in the Tuscan port city of Livornoi in Italy since the Munich Olympics, in an interview some years later, he recalled that after the race he also presented himself for drug testing, along with the medalists only for officials to tell him he wasn’t required.

Unbeknown to Biddell, being turned away from doping control ultimately cost him an Olympic bronze medal. After Huélamo was booted out of the results, Biddell stayed fourth, never to be promoted.

As a kid, I recall my father telling me that NZOG delegates tried over the years to have the Olympic medal awarded to Biddell, but to no avail. Clouding the issue was conjecture over Huélamo’s DQ, because while coramine was banned by the IOC, the ICU – cycling’s governing body of at the time – didn’t have coramine on their list of banned substances. In January 2014, when Huélamo died aged just 66, the argument was again bought to light in his obituary. For their part, the Spaniards never accepted there was any wrong doing by Huélamo.

But the result remained. Biddell, third in Munich, remains without an Olympic bronze medal, which raises an interesting question that has been asked a lot this year in light of retrospective drug testing that has caught out cheaters in the lead up to Rio: Should results be amended with medals re-issued off the back of drug cheating?

You’d think the answer would be a resounding yes, yet the handling of such affairs has been inconsistent and circumspect.

For his part, Biddell’s view on drug cheating was one of tolerance. He rationalised his fate in Munich in the context of the era he competed in, acknowledging he made mistakes during the race that ultimately cost him. He concluded there wasn’t one single thing that denied him his medal. Had he not made mistakes, he reasoned, he’d have finished ahead of Huélamo, coramine-aided or not.

Biddell also wondered whether Huélamo simply took a prescribed medicine that may have been legal in Spain at the time. He also expressed a measure of sympathy for Lance Armstrong, who he said, if clean along with everyone else, still would have cleaned up the Tour of France. The point he made supports an argument that to be a contender at the highest level, with everyone doped, they’re all on a level playing field. Ben Johnson argued this point when he was busted at the Seoul Olympics. It was a valid point as later in their careers both Carl Lewis and Linford Christie, so vocal and judgemental at the time, returned drug positive results. In fact, the eventual bronze medalist in that race – described as the dirtiest race ever run – Calvin Smith, is on record as saying he is the real 1988 Olympic Champion. I’m sure American Shannon Rowbury, sixth in the woman’s 1500m at the London Olympics, would say the same, after three athletes ahead of her were re-tested this year and busted.

British athlete Liz McColgan-Nuttall is another who was denied and never promoted, in her case into the gold medal winning position. Liz has said she doesn’t think there should be any redistribution of medals off the back of drug cheats being caught out years later. Her view is even when beaten by a drug cheat, in her case the Russian Olga Bondarenko, she never crossed the line first, so no re-ordering of medals is going to change that. As disappointed as she felt being beaten to gold at the 1988 Seoul Olympics, Liz says she is now proud of what she did on that day. She raced clean and couldn’t have run any faster than she did.

While I accept Liz’s point, in my novel No Wind I decided that for John Kelly, I’d go the other way. I think Kelly would have demanded justice, and ultimately so do I. 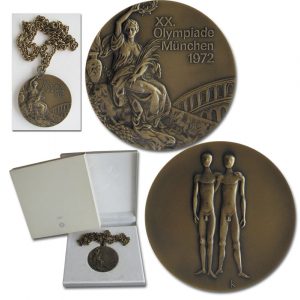 The 1972 Munich Olympic Bronze Medal. Something tangible and definitely worth having.

I think Bruce Biddle should have received a bronze medal for his Munich ride, even if it took ten years for him to get it. For me there are plenty of people walking around with Olympic medals who weren’t caught on the day, such as Olga Bondarenko and Wang Junxia, to name two; and as recent events have proven for many cheating athletes, their past has, or will catch up with them now there are new techniques that can be applied to old samples.

Biddell’s medal should have been something tangible to be passed down through his family, or placed in a sporting museum. That his medal hasn’t been re-issued and sits at the IOC HQ in Switzerland leaves us with an Olympic anomaly that will only become more distorted over time before being forgotten as time passes. It’s been 44 years.

There’s no fair play or justice in that.