A whopping 60% of respondents said working as a full time author was their dream job. I thought it might have been the lure of the usual high paying suspects– you know the ones – lawyer, accountant and doctor – but all had become less appealing than being a full time writer. Perhaps that was because respondents had an acute awareness of the associated pressures and stresses those jobs attract.

As one of the sixty percenters, I’ll admit I saw the attraction of being a best-selling blockbuster author a long time ago. It came from watching Magnum P.I. Through the eyes of that television show I saw the tangible rewards of Robin Masters, the international blockbuster paperback writer of tardy fiction complete with Robin’s Nest and the bright red Ferrari set in an idyllic setting in the sun. I saw myself as an author living on the edge of a blue ocean who lay around on a balcony sipping ice cold beers absorbed in writing exciting and tardy stories. More recently the British television mini-series Fleming: The Man who would be Bond, reinforced the lifestyle of the successful paperback writer, this time living the dream at Golden Eye in sun drenched Jamaica, typewriter set up under the veranda with a bottle of something hard at hands reach.

Who wouldn’t want a lifestyle like that? Waking up without an alarm clock, going out for a decent long run, eating breakfast outside on the terrace then settling in to write thrilling novels of espionage and adventure every day? What fun! At the time I was dreaming about doing that, I was reading books penned by the likes of Wilbur Smith who owned houses in several countries, including the Seychelles. He was  someone who spent half the year roaming around the planet diving off reefs in turquoise waters, fishing or shooting animals in Africa. 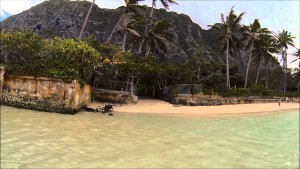 Robin’s Nest, Hawaii. Yes, I could write my books here.

I don’t like shooting game, but The Seychelles sounded great to me, and it still does. So I was sold on it, as are 60% of the YouGov survey respondents, no doubt thinking the same as I once did; that as a professional writer, such a lifestyle is attainable if they have their dream job.

Another survey found the median income for the average professional author is just £11,000 (or $23,201 at the time of writing this blog) which is a far cry from all that – especially when you consider the time and effort it takes to craft a story to be as perfect as it can be (watertight). There is a huge gap between the number you’re likely to earn and the number you need to get the Ferrari, let alone the beach front property let alone on a tropical island with cable television. In fact what it actually means is that just 11.5% of all UK writers make a living solely from writing, and that’s in a big country with a big domestic market and captive audience.

Here in NZ it’s probably worse, given how tiny our domestic market is. Even with on-line outlets such as Amazon, it’s incredibly hard to get noticed either as an indie author or as a new comer with a publishing house behind you, in a marketplace where there are another five million authors doing exactly the same thing as you are.

I suspect the respondents to the survey made their choice based on working assumptions that  they’d be (a) an instant multi-million copy best seller, or (b) had already made their fortune doing something else to allow them to be a full time writer, so she’ll be right, mate, I’ve already got my Golden Eye. 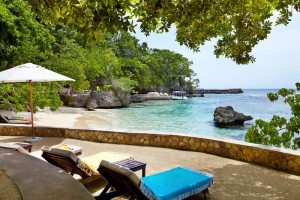 Golden Eye. Oh yes, I could write books here too!

However if not the case, the story is a bit different.

The unpalatable truth of wanting to be a professional author is that it’s just as hard and as stressful as any other profession with it’s fair share of slog. Aside from the lack of money, and despite becoming a published writer, there are significant obstacles to overcome.

One obstacle I found living in such a small a country as New Zealand is there are only a couple of major publishing houses, and not all of them publish New Zealand fiction. For an unknown novelist starting out with a publishing contract, the hard selling and marketing work is largely left to the author while being relieved of their copyright. No one tells you that, but the publishing houses presume you understand that they have production costs, which they do. So given you’ve got to do your own hard yards even with a publishing contract behind you, you may as well keep the copyright and 100% of the royalties seeing it’s you doing the hard promotional work to get your book noticed. Sure with self-publishing you’re up for all the costs, but on-demand printing can reduce some costs that can then be diverted to advertising or a campaign.

The one thing a publishing house does give you though, which is significant, is getting your book onto the right bookshelf and in more bookstores. For the Indie author, this is probably the worst challenge faced: You’ve got a great story to tell and sell, but little to no shelf space in a few stores.

In New Zealand, our biggest nationwide book store chain is Whitcoulls. They only deal with the big publishing houses. They say that from these publishers they can get everything customers want, so to set up small publishers on their system is too time consuming, inefficient and therefore too costly to be worth their while dealing with so many, so they simply don’t.

Luckily we have another bookstore chain with franchise owner/operators and independent bookstores who are more accommodating. We are also fortunate in New Zealand to have Writers Plot. This is a new bookstore set up in Upper Hutt, Wellington, stocking only New Zealand writers; both Indies and those who publish through very small/niche publishing houses. Writers Plot also provide a mail order service with a national reach. The founders of this little bookshop ought to be given a gong come honours time for their services to writers.

It’s these types of independent bookstores who provide possibilities that keep authors writing in the hope that one day they too can become one of the 11.5%. Despite the many hurdles and barriers, it’s inspiring to see so many persevering given that for 88.5%, the money simply isn’t there.

We live in a world now where indie publishing allows authors to attain their desired job aspirations, and as a market disrupter, more authors to see their dreams materialise, even if on a scale that isn’t going to see them living in an idyllic setting such as Robin’s Nest or Golden Eye. The good thing that comes from indie publishing is that there is a lot more authenticity and more variety in story telling than you’d otherwise get. The Martian and the movie that came from it, is a great example of that.