Posing Up Close in London

One of the reasons for attending the recent World Track and Field Championships in London over August was to get a first hand a feel for how showcase events are run these days so I can more accurately describe the mechanics of the latest innovations in my novels.

Insofar as writing my first novel No Wind went, my personal experiences and research was spot-on. At least that’s what my beta-readers and others who I know in athletics told me.

A recent conversation I had went along these lines.

“How did you get that insight so right? You must have done such a lot of research, because you never ran at the worlds let alone in Stuttgart.”

“I did a lot of research,” I replied before silently adding, so much work to create totally accurate bullshit!

Because that is what fiction is: It’s all made up with supporting facts and accuracy.

Its important to be accurate when making stuff up. For me, its been a long time since I’d last attended a major international track meet, in New Zealand in 1990, yet since then I’ve been aware of efforts to modernize track meets to keep the event more relevant so fans are more engaged.

Being relevant and engaging to grow the sport is a top priority for the IAAF and organising committees alike given the challenges faced in needing to off-set drug cheating and address hyperandgenist athletes, two issues that pose a real threat in deterring the next generation of fans and competitors alike – especially teenage girls who aspire to succeed at the highest level – from drifting away altogether. For competitors and the fans alike they want their sport to be a fast-paced spectacular that is fair and holds their interest, two different things that can manifest themselves in very different ways. 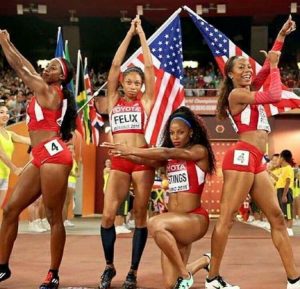 Charlies Angels – The Americans express themselves before competing.

A year ago in Portland at the World Indoor Championships, I became aware of new moves around the way athletes were being introduced to the fans, although in truth it began in Beijing in 2015. I thought the innovation was good as it allowed athletes to show more of their true selfs, and in truth more than that, highlighting graphically those who were brash and or creative that built their personal brand and those who were introverted. Finalists were introduced much like professional fighters or gladiators, coming out of the tunnel with gas ignited flames announcing their arrival into the arena. Relay teams stripped down, stepped out, did their pose – in the case of the American women’s relay team – resembling the classic silhouette from Charles Angles, before running and limbering to set themselves for their event. Indoors it was great. In Beijing before Portland it worked a treat, translated to outdoors in London, it wasn’t all plain sailing.

This is what happened.

First some context: As a spectator in a seating bowl along with 85,000 others, on an August evening in London you can sit reasonably comfortably in lightweight clothing. If you want to exit the bowl to go get a beer or hot chips, outside on the concourse there was a noticeable drop in temperature.

It was the same for athletes outside the stadium in the adjoining warmup arena. The evening sessions in London kicked off around 6pm, running through to 10pm. During August in Stratford, London, come 7:30pm the top temperature of around 21º celsius started dropping back into the high teens.

Down at ground level without the mass body heat keeping fans comfortable, athletes experienced conditions that were significantly cooler. When they came from the warm-up track to be corralled under the stands, they removed their sweats so they could run straight out onto the track. Being held in a long corridor with an open end to the outside generated a cool breeze that blew through to lower the temperature under the stands. As athletes moved along the corridor, away from the warmup track down the home straight towards the 100m start at the top of the home straight, depending on what was going on out in the stadium, their journey under the stands along the home straight was either regulation or delayed.

If progress was delayed, athletes were kept milling around without their sweats on. From that there were consequences, none more so than the Jamaican relay teams pulling up with cramps and/or injuries, highlighted by a rolling in agony Usain Bolt.

The story as to why Bolt pulled up was put down to Mo Farah, with his family in tow, taking far too long out on the track acknowledging fans like me in the stands. While he was doing that and we were adulating him from our seats, under the stands, Bolt’s legs were cooling down. You can argue it was the same for everyone else, so why was it he the only one to pull up lame? In that there is an interesting discussion to be had, one that also touched on why were performances slower and lower than normal? Was it because these championships were cleaner than previously? Apparently, 30% of athletes at the 2011 edition in Daegu have admitted to taking performance enhancing drugs of one sort or another. I’d like to think that was part of the answer but I also think another part of the answer was simply due to cooler temperatures in London. 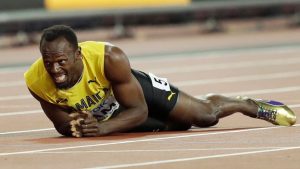 Usain Bolt lies sprawled on the London track after cramping

From my trip to the worlds, I got some good insights from being there on the ground that I can apply to future stories, this small example I’ve shared being one.

While it was one reason for going, another was to simply watch a great track meet which was arguably better than a year ago in Rio, if just because of the atmosphere generated from a packed out heaving stadium fill of screaming fans who’d descended from across the UK, Europe and North America.