getting to know Bruce Melrose

Did you always want to be become a writer?

I’ve played around with writing since I was at school. My first attempt at writing a novel was some twenty years ago. I thought the story I wrote had some promise, being action-adventure, and very much in the Wilbur Smith style. It was exactly what I wanted to read more of, however Harper Collins had different ideas to mine. Without an agent, or any clue of what I was doing, I sent them my unsolicited manuscript, like a cold call. I don’t know if they actually read the manuscript, but they did tell me that while the story was strong, I needed to find my own voice, and wished me luck. Back then their market research told them to publish supernatural and fantasy stories, of which I had no interest in reading, let alone writing. Supernatural and fantasy were apparently the books people wanted more of, not action-adventure stories. Of course, what that meant was there was a glut of supernatural and fantasy stories that hit the shelves, and that only made it harder for me to find the sorts of books I wanted to read, even in spite of writing one myself. After that experience, I don’t think I was deterred from becoming an author, but it did firm up my thinking about things.

How do you find your story ideas?

A few years ago I started working out on a cross trainer in the garage looking at a blank wall. There wasn’t a lot of stimulation around me, just the cross trainer display telling me I had chugged through 1500m in 3:29, passed 5,000m in 12 minutes and was heading towards 10,000m in 25 minutes, at which point I’d go on to do 12,000m in 30 something minutes. If I ever wondered about the accuracy of the display, it didn’t last long because I was already focused on using it to run races in my head, as I looked at the time and distance ticking over in front of me. That was where No Wind came from. I played out in my head different scenarios as I imagined myself racing at various big meets all around the place. It certainly made the time fly and became my motivation to get on the cross trainer to work out, and to go faster and faster.

Does writing come easily to you? Do you revise much?

Writing No Wind came very easily to me. The story was well formed in my head before I ever wrote a word. No Wind is essentially three stories, each set in a different year based on different scenarios I came up with on the cross trainer. It helped that I was writing about something I knew about. In terms of revisions, apart from proofing and editing, there were hardly any revisions to the story. Ali made a strong recommendation to me that I change the outcome for one character, which I did, and I’m glad because that character became a central figure in my follow up novel Clipped Heels.

Did you take writing classes?

Never have. I’m sure some people might suggest I should have! But for me, I wanted to find my own style and my own voice, like I got told to do all those years ago. What I did, and still do, was study the writing of other authors I like, and apply aspects of their writing to my own.

What’s the best advice about writing anyone gave you?

I got two pieces of advice. The first was to write something about what you know about. I think that’s a common one that many writers recount. So, for me, I wrote about a middle distance track runner and the world of track and field. That meant right from the start, I was off the agenda for the likes of the big publishers wanting crime and fantasy stories set to medieval backgrounds. The second piece of advice I got was to just write the story you want to read. You’ll never satisfy everyone, so don’t try to. Satisfy yourself in the hope that others will also like what you’ve done.

How much of your story comes from your real life experiences?

There is a lot of personal experience I drew from that has made its way into No Wind, although in saying that, my accomplishments are very modest compared to what I’m writing about for my characters. However, I do know how big track meets work and what happens in the wrap around to those meets. I’ve raced track races at some big meets, so know about that, and I’ve experienced some of the injuries I hobbled John Kelly with. For all that, my stories are not biographical, nor are they intended to be entirely factually accurate. For me, what’s important is that I’m telling an entertaining story against a background canvas of a sport I love.

How do you find the balance between plot and character development or relationships among your characters?

I’m very clear in my mind about what I want out of my books, and that is a fast paced, entertaining story with appeal for runners and non-runners alike. To achieve that objective, there is a definite driver for how the story is written in terms of style. As I see it, a criteria for a great book is one that you can’t put down and one that you want to read time and again. In my experience, those stories tend to be the more enjoyable uplifting tales rather than very dark stories of woe with tortured and deeply flawed characters. I think I have the balance about right. Feedback I’ve received is that runners re-read the races, then want to go for a run, while for others who may not be so sports focused, they like what’s happening between the races.

How much time do you spend researching?

There is a lot of research that goes into a book like No Wind, although not to the same extent as if I was writing crime or a thriller. For me, I’m using first hand experiences rather than needing to undertake a lengthy block of research before writing. Subsequently I’ve been able to put out a novel in a shorter time. Of course, if I were writing a thriller, I’d likely opt out and make a conscious decision to write a Mac Bolan type story instead, in which case, it would be more weighted towards entertainment and fun, rather than any semblance of reality requiring lengthy in-depth research.

Who are your writing influences?

I read of lot of Wilbur Smith and John Gordon Davis as a teen and I still enjoy re-reading some of their work. I think in terms of developing my own style, I’ve been drawn more towards Hemingway and Hammett and the stripped back narrative of James Patterson. Patterson has his ‘literary’ critics, but I’m drawn more to writers who write, what I call, ‘clean.’ They use short and simple construction, which I find keeps the reader better absorbed in the story. Another early influence for me, in terms of writing a novel about a runner, came from the old British Tough of the Track comic strips, which might be considered a bit out there, but what those strips convinced me of was that you could do a decent story about a guy running laps of a track. Those comic strips are still popular, so there is still an audience for stories about middle distance running. 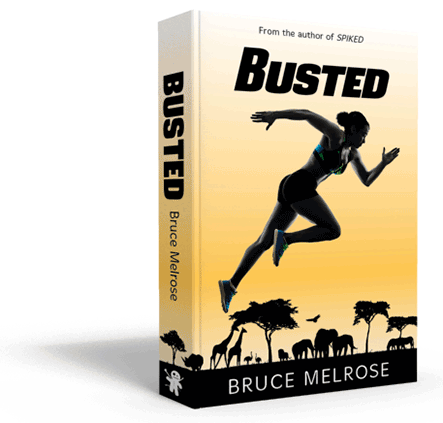