The World Indoors at Portland 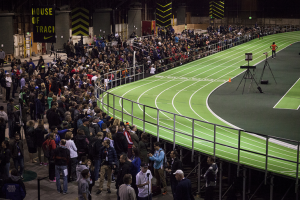 The World Indoor Track and Field Champs hosted in Portland.

Over the last weekend I really enjoyed watching the latest edition of the World Indoor Track and Field Championships, held in Portland, Oregon.

Of particular interest this time around for me was to gauge the reaction to the sport, given these championships were held within a long shadow cast by the revelation of chronic and systemic drug taking by Russian, Kenyan and a bunch of athletes from other nations, now on the IAAF’s watch list. The indoors was also held within weeks of tennis superstar Maria Sharapova being busted for taking Meldonium. So why is that important?

Only in that until Maria called her press conference on the ugly carpet of a downtown LA hotel to confess her sins, I’d never even heard of Meldonium. As it transpires, I’ve been living under a rock because in quick succession, an awful lot of elite athletes then got busted for having taken this drug over a prolonged period, presuming they were safe in the knowledge it was only on WADA’s watch list, rather than the official banned list. Now the drug has been banned, we’ve already seen some 100+ athletes test positive as abusers of Meldonium including former World Indoor 1500m Champion Abeba Aregawi, and European sprinting medalist Nadezhda Kotlyarova. I’ll bet even more athletes will yet be uncovered.

So, a lingering question was – would the fans turn out to watch? And how would these indoor champs play out without the expelled Russians?

If there was ever a time where something needed to change in athletics, these championships presented that moment for the IAAF. I have to say I thought the organisers did a fantastic job with the meet. They added some interesting innovations for television that received favourable comment including introducing athletes in a similar way to how professional wrestling do it. I did wonder how I might have presented myself to the crowd, had I been 22-years younger and good enough to be a competitor in Portland. Would I have taken the piss? Quite possibly. I might well have jogged slowly down onto the track swooping around like a make-believe airplane slapping the hands of an adoring public leaning over the hoardings.

The overall answer to the lingering question, for athletics, was a resounding yes. The fans did turn up, and they were treated to a great show featuring great races, throwing and jumping held over three full days.

I’ve always been something of a closet indoor track fan, right from the beginning. Some of my earliest athletics memories have been from indoor meets, not that I’ve ever attended an indoor meet for real. Going back to a time before I ever ran myself, I still recall watching – what I think must have been the Millrose Games –  back when television pictures still came in black and white from time to time. The thing that grabbed me back then and stayed with me was the races seemed a lot faster due to being run on a 200m track. Around and around the runners went, peeling off laps more quickly than on the larger 400m track. It all seemed quite exciting, and left a lasting impression on me.

When I wrote my novel No Wind, I decided early on that John Kelly was going to run indoors. For me, it made total sense, and for me, I’ve been a little surprised over the years as to why more New Zealand athletes haven’t aimed for the world indoors, particularly middle distance runners, given it falls around the time of our own national championships in March. I might have thought our athletes competing in a southern hemisphere summer season would be in great form to pop over to wherever the indoors were being held to run a couple of races.

Now I know there is some adjusting to be had in running on the boards – as it was once referred to. For starters as a 200m track, the bends are tight. (Fortunately they are also sloped – or banked) and there are a different set of tactics to be factored in, something I did bring out in my novel.

I recall the great John Walker ran some indoor races back in the 1970’s, when at the peak of his powers, and as a big man, racing on a banked 200m track, it took him some getting used to. Other runners, more slight of frame, such as Eamon Coughlan and the current world indoor 1500m champion, Matt Centrowitz, are perfectly built for indoor running. Both have excelled indoors and made their mark. In doing so they have provided a different competitive dynamic. Like the different tactics, these were things I was consciously aware of when I developed the attributes for Steve Cook in No Wind.

In a novel I’m currently fine-tuning, I’ve introduced some thinking about how a coach might approach taking his athletes from an outdoor season to an indoor championship by incorporating training sessions on a 200m track outdoors. I haven’t quite finished exploring the indoor track and field championships in my novels.

One of the aspects of the New Zealand Indoor Track and Field team in 2016 that I liked was it loosely mirrored my vision for how I saw a successful New Zealand team at an indoor championships. Again in my novel I wrote of Kelly being in a very small team that was also very successful, so you can imagine my delight when the Portland team proved the team I created for my novel No Wind wasn’t  so wildly fanciful or unbelievable after all, so thanks for that, Portlanders. Whew!

For the record, Portland 2016 was the best medal return for any New Zealand track team since 1964. Jacko Gill finished 9th in the shotput, Eliza McCartney 5th in the pole vault, Nick Willis (1500m) and Valarie Adams (shotput) scored bronzes, with the mighty Tomas Walsh crowned world indoor shotput champion. New Zealand finished in eighth spot on the medal table ahead of a number of nations with a strong and long pedigree at the world indoors that included both Germany and Great Britain (who failed to win any gold medals). 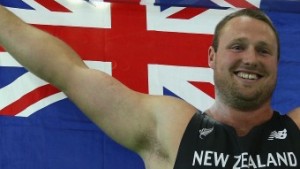 The next World Indoors are being held in Birmingham. For me, I think it might be time to get along in person. That whole background vibe that was going on in Portland, looked like a lot of fun to me, and worth being part of. All I have to do is get over leaving summer to head into a dull English winter – even if only for a week. I should be right. Right?

Acknowledgement | since the topic of this blog is about the world indoor athletic champs, I ought to say to readers that I am aware that the rule at the world indoors, is to have two entrants per event. In No Wind, I threw three Kiwi’s into the 1500m, against all the rules. I did so purely because it let me tell the story I wanted to tell  – and because in the universe of Kelly, I can!